Over the past year, the rapidly rising, 43-story One Congress office tower has become a distinct new landmark in Boston’s North End. But going largely unnoticed are the Potain MR 415 and MR 418 A tower cranes that are quietly growing along with the building — and also inside it. 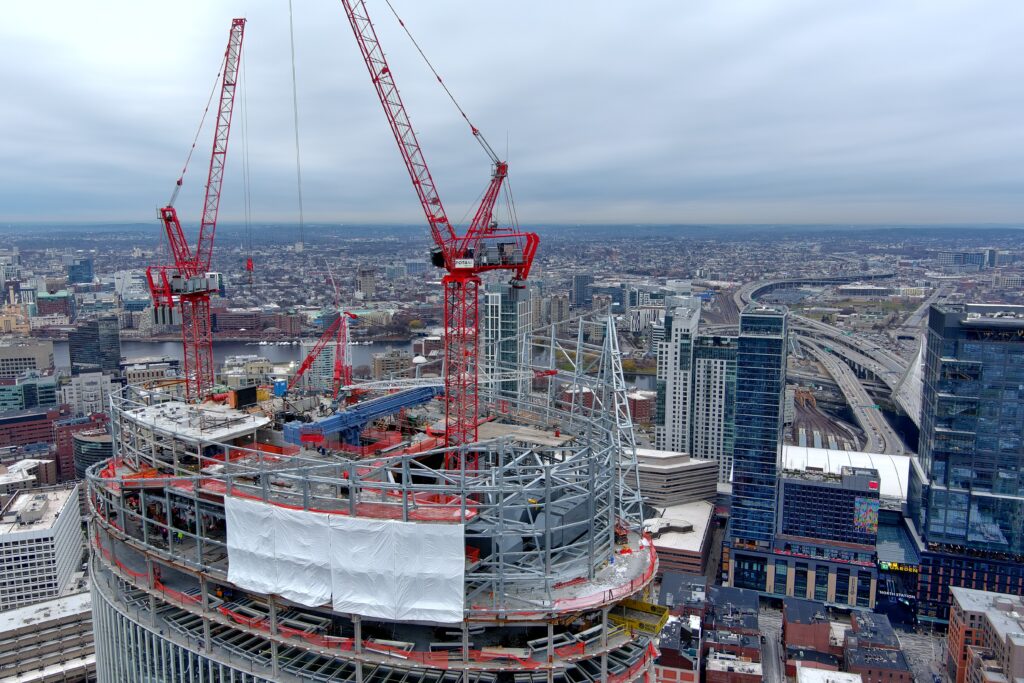 Forming part of the western parcel of the 4.8-acre Bulfinch Crossing mixed-use development, a stone’s throw from Boston City Hall, the imposing new building tops out at around 565 ft and offers spectacular views over the city and harbor. The innovative approach to its construction was a result of the desire to begin leasing space within the tower as quickly as possible, explained Cori Amadon, vice president at James F. Stearns, the leading crane provider for the project.

“We were approached by John Moriarty Associates, the main contractor, to devise a plan that would allow them to start leasing floors six through 25 before the rest of the structure was complete. That meant we had to rethink the original plan of tying in tower cranes to the building’s outside perimeter and come up with an interior climbing program instead.”

The solution was to make full use of the building’s concrete slipform core, which grows faster throughout construction than the floors that surround it. Once structural work is complete, the building core will be home to the elevator shafts that provide vertical transportation throughout the building.

“When we started looking at this project, we thought, ‘Ok, we’ll climb the cranes up through the concrete core,’ but the concrete company was initially opposed because they worried it might subtract a lot of their workspace.Typically, when developing internal form systems, the concrete contractors design a platform system that covers the entire core that is used for assembling rebar, shaking rebar out, etc., so they can hoist material from the ground and land it on their workspace. They asked us to find a way to put the tower cranes on the outside of the core instead.”

Using Potain MR cranes on the project was an inspired choice. The interchangeability of their bases with those of its sister ranges, the MD and MDT models, increased the number of installation options for internal and external climbing configurations. Also, their uniquely mounted luffing mechanisms and hoists saved space on the jobsite, enabling operation in this confined space.

Demolition of an adjoining car park exposed a row of four connected concrete core cells that provided fully enclosed support for the climbing mechanism for the Potain MR 415. The MR 418 A was then added to the outside of the westernmost cell, where it too would soon be largely obscured from view by the steel frame of the tower being built around it. 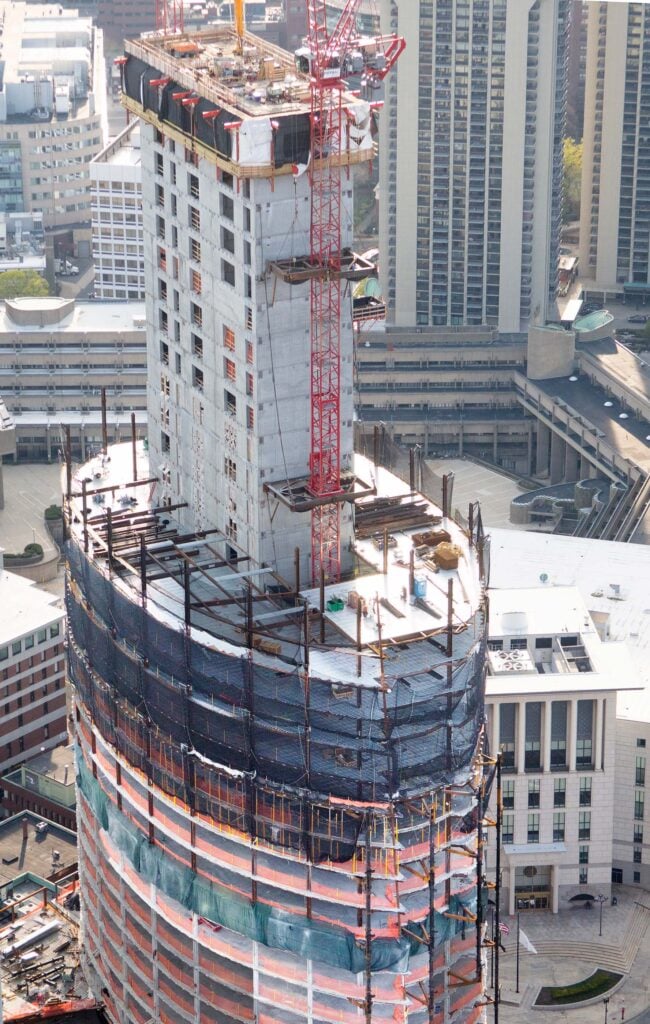 In collaboration with engineering firm Howard I. Shapiro & Associates, plans were drawn up for each stage of the MR 415’s upward journey. For Phase 1, the initial installation, the crane would be freestanding, with just under 197 ft of mast, and a similar jib length. In Phase 1A, marking the end of the freestanding operation, a climbing frame was installed in the core before level 14 was poured, and the building was then erected up to the 15th floor.

The contractor’s desire for a spacious working platform had left a gap of mere inches around the mast perimeter and the core walls, leaving the riggers with no opportunity to assemble or drop in the mast from above. Instead, the beams were pulled into the bottom of the core through a doorway, assembled at ground level, and then maneuvered into position by crane and/or air tuggers.

As the project progressed to Phase 2, crane configuration underwent a major and permanent change. The jib on the MR 415 was shortened to 131 ft while a second tower section was added, taking the length of the mast to 246 ft, as the building was erected to the 22nd floor.

During the next stage, the MR 415 was disconnected at the second tower section and raised 90 ft, from ground level up to level 11, where the first tie had been placed, and the climbing mechanism attached. Once the building reached the 29th floor, the first diving board (support frame) was added at the 25th floor, leaving the crane ready to jump once more.

The crane climbed another 90 ft during each of the next two stages, with a second diving board added at level 32 during Phase 4 and a third board seven floors later during Phase 5, by which time the structure had reached level 42. For the final push, Phase 6, one last climb of 88 ft would be sufficient to enable topping off in July 2021, with the crane supported by the diving boards on levels 32 and 39.

“One of the unique things about this project is that it has a four-cell system from ground level up to level 25, and then one of the cells ‘disappears’ and it turns into a three-cell core. So, initially we were working internally surrounded by a concrete cell up to level 25, but then we had to come out of that and switch from a four-sided support system to utilizing a diving board system on the outside of the core.”

These smaller, lighter cranes provided further benefits to a project that might once have relied on the use of larger, more costly models.

“By reducing the loads that are imposed, they give you the flexibility to come up with a different type of support system that’s not as cumbersome as would be needed to support a larger tower crane. You can get great results working with an MR 608 (32 t maximum capacity) from the perimeter, but if you put a 24-ton capacity MR 418 into the core of a building with a shorter boom, you can pretty much get the same benefit.”

Disassembly of the cranes was also straightforward. A derrick crane was placed on the rooftop to remove one of the tower cranes in November 2021, while the 418 A continued placing glass for the tower’s construction. The crane was then removed in an almost exact reversal of its installation, according to Amadon.

With both tower cranes now removed, sixteen floors comprising a total of 1 million ft2 of trophy office space are now available for lease and will be ready for occupancy in 2023. The One Congress project is a partnership between Carr Properties, National Real Estate Advisors, and The HYM Investment Group.